Brazil is the most important e-commerce market in Latin America and one of the fastest-growing worldwide. The country accounted for more than 38 % of the Latin American e-commerce market in 2017. With online retail sales amounting to almost 18.7 billion U.S. dollars in 2017, Brazilian e-commerce is still rather small when compared to other BRIC countries. Online shopping in Brazil represented only around 3%of total retail sales in 2017. However, e-sales are estimated to grow at a compound annual rate of almost 11 % between 2018 and 2022, and set to exceed 31 billion U.S. dollars by 2022. 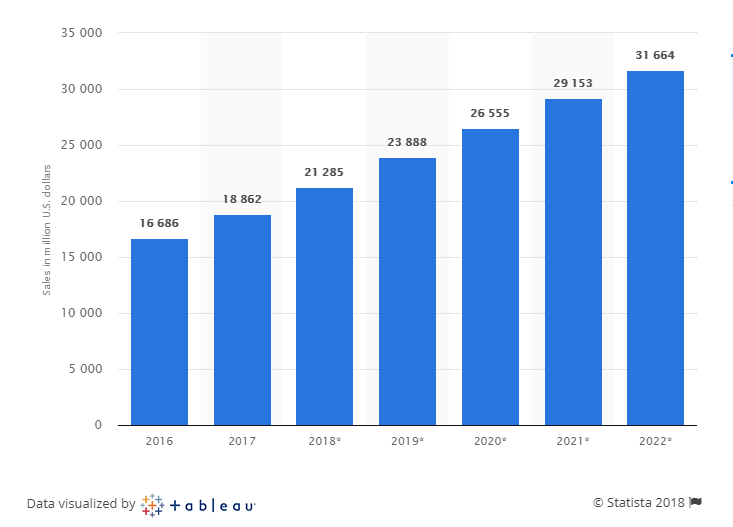 Aside from the region-wide marketplace Mercado Libre – known as Mercado Livre in Brazil – the most popular e-commerce platforms are of local origin. Netshoes, Americanas.com and Submarino, just to name a few, are the favorite online shopping portals among Brazilians. The country constitutes a promising market for global giants such as Amazon, eBay, and Alibaba, though these e-commerce websites are not as widely used by Brazilian consumers. Amazon only launched full retail operations in Brazil in October 2017, after selling just books during the previous five years.

The country had around 61 million digital buyers in 2016, out of which 51.6 % were women. By far, the most popular payment method based on share of online spending was credit card; while mobile phones were the main e-commerce category by revenue share. The hottest season is, without a doubt, Christmas: online shopping reached 8.7 billion Brazilian reals between November and December of 2017 (approximately 2.8 billion U.S. dollars at December 31, 2017 exchange rates).

Finally, the mobile sales segment is on the rise in Brazil. The revenue generated from mobile e-commerce is forecasted to grow from five billion dollars in 2017 to ten billion in 2021. In 2017, mobile shopping penetration surpassed the 25 % mark, with mobile sales reaching 26.5 % of total e-commerce on Black Friday. During a recent survey, up to 84 % of Brazilian respondents stated they were satisfied with their m-commerce experience.